By Aftab Ahmad, New Age Islam
30 April, 2014
There are groups among Muslims who are of the firm opinion that Sufism is not compatible with Islam. They believe that Sufism is akin to monasticism as practiced by the Christians. But the study of the various verses of the Quran leads us to the conclusion that Sufism based on the basic principles of the Quran is a part of Islam.
There are many explanations to the origin of the word Sufi. But the most acceptable origin seems to be the term “As’haab-e-Suffa” (People of Suffa). Suffa in Arabic means a shaded place. Suffa was a shaded place in the Masjid-e-Nabwi (The mosque of the Prophet in Medina) where homeless and destitute people stayed and gave company to the holy Prophet round the clock. They were poor and led a very ascetic life. They were 70 or 80 and their numbered increased and decreased with time. They led a content and simple life.
With the passage of time such a simple life became a way of Muslims who engaged in the remembrance of God, worship and meditation throughout the day. They discarded the worldly pleasures and luxuries of life. In the 8th century this way of Islamic life assumed the status of a school with certain rules and principles like meditation, remembrances of God, namaz and scant eating. This way of life developed mainly in Kufa and got the name of Sufism. The first person who was called a Sufi was a pious man called Abu Hashim Kufi. People called him Sufi Abu Hashim Kufi. Another person who was also called a Sufi was a Shia chemist Jabir bin Hayan. Thus Sufism as a school of Islamic spiritualism originated and flourished in Kufa. Later Sufis like Owais Qarnin, Hasan Basri and Abdul Qadir Jilani emerged.
http://newageislam.com/islamic-society/d/76796

Posted by Moderate Islamist here at 11:53 PM No comments:

Email ThisBlogThis!Share to TwitterShare to FacebookShare to Pinterest
How Islam Transformed Arabs From The State Of Jahiliya (Ignorance) To Being The Torch Bearers Of Wisdom?


By Varsha Sharma, New Age Islam
30 April, 2014
Generally, Islamic scholars use a term pre-Islamic and maintain that it was the “age of ignorance” (Jahiliya). They mention that with the advent of Islam the ‘age of ignorance’ came to an end. First of all, the division of human history into Pre-Islamic and Post-Islamic eras is an intellectually unjustified interpretation of history. As regards Jahiliya, the holy prophet and his companions were of the opinion that Jahiliya was a condition of the mind and did not refer to any specific period in history. The Qur’an had changed the minds of its followers and accordingly a new era had been formed. Ignorance can disappear only when the teachings of Islam are whole-heartedly accepted and dutifully followed. That is the reason that the intellectually and socially backward atmosphere in the Arabia which existed 1400 years is still prevailing.
A cursory glance at the history of the Arabia in the sixth century A.D. shows that the Arabs were then deeply entrenched in utter ignorance and extreme darkness. It will be explicitly clear if we take a critical analysis of the conditions in the Pre-Islamic Arabia.
Arabs before Islam
http://newageislam.com/islamic-society/d/76795

Posted by Moderate Islamist here at 11:51 PM No comments:

Posted by Moderate Islamist here at 3:46 AM No comments: 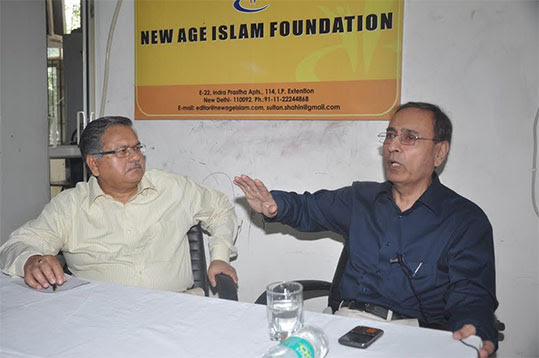 Posted by Moderate Islamist here at 2:00 AM No comments: