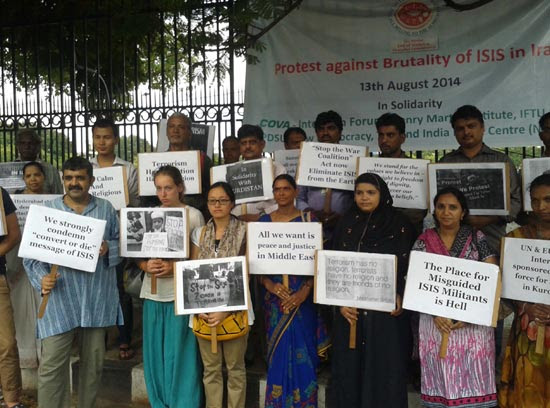 India
Why A Photo Showing Tamil Muslims In Support Of ISIS Is More Troubling Than Any IB Report
ISIS Flag in Kashmir Puts Cops on Alert
In Eid ul Fitr Sermon Clerics move government to help Palestinians
US brackets UP with Syria, Iraq
http://newageislam.com/islamic-world-news/new-age-islam-news-bureau/libya--al-qaeda-linked-militants-declare-benghazi-an--islamic-emirate-/d/98362

Posted by Moderate Islamist here at 11:35 PM No comments:

By Murtaza Haider
Jul 22, 2013
It is not merely the faith or oil that flows out of Saudi Arabia. The oil-rich Arab state and its neighbours are busy financing Wahabi and Salafi militants across the globe.
A recent report by the European Parliament reveals how Wahabi and Salafi groups based out of the Middle East are involved in the "support and supply of arms to rebel groups around the world." The report, released in June 2013, was commissioned by European Parliament's Directorate General for External Policies. The report warns about the Wahabi/Salafi organisations and claims that "no country in the Muslim world is safe from their operations ... as they always aim to terrorise their opponents and arouse the admiration of their supporters."
The nexus between Arab charities promoting Wahabi and Salafi traditions and the extremist Islamic movements has emerged as one of the major threats to people and governments across the globe. From Syria, Mali, Afghanistan and Pakistan to Indonesia in the East, a network of charities is funding militancy and mayhem to coerce Muslims of diverse traditions to conform to the Salafi and Wahabi traditions. The same networks have been equally destructive as they branch out of Muslim countries and attack targets in Europe and North America.
http://newageislam.com/islam,terrorism-and-jihad/murtaza-haider/european-parliament-identifies-wahabi-and-salafi-roots-of-global-terrorism/d/98355

Posted by Moderate Islamist here at 9:30 PM No comments:

Email ThisBlogThis!Share to TwitterShare to FacebookShare to Pinterest
Role of Saudi Arabia, As Caliphs of Islam, In Promoting Islamic Extremism and Jihadism


By Nauman Sadiq
JULY 29, 2014
The Pakistani military establishment is rightfully blamed for creating the Taliban; but the phenomena of religious extremism and terrorism is not limited to Pakistan; this conflagration has engulfed the whole of Islamic world from Iraq and Syria to Algeria and Indonesia and even the Muslim minorities in China, Thailand and Philippines. Pakistani establishment does not have access to all these regions, thus, aside from local actors; some regional and global actors are also responsible for creating the menace of Islamic extremism and terrorism. A more holistic understanding of the problem will identify three actors responsible for creating this menace: Pakistani military establishment; Saudi and Gulf petro-monarchies and last but not the least, the Western support for the Afghan Jihad in the context of the Cold War.
http://newageislam.com/radical-islamism-and-jihad/nauman-sadiq/role-of-saudi-arabia,-as-caliphs-of-islam,-in-promoting-islamic-extremism-and-jihadism/d/98357

Posted by Moderate Islamist here at 9:25 PM No comments:

Email ThisBlogThis!Share to TwitterShare to FacebookShare to Pinterest
Bringing Down The Institution Of Hadees From Its Pedestal, Equal To Quran: No Matter How Revered, Hadees Is Not Divine Islamic Scripture, Any Blind Faith Is Unwarranted


Note: I am shifting this debate from its present thread, as, it doesn't quite belong there and deserves a separate line of discussion.
-----

Dear Naseer Saheb (Observer), I know you are on Ramazan leave and I don't really want to bother you, and understand, that you may not even see it. But since I notice Muhammad Yunus saheb not responding to your observations on the issue of hadith regarding the relative purity of a male child's urine over that of a female child, perhaps for fear of being maligned further,  (I myself have that fear, as do many others who have stopped engaging with you, knowing your frustrations and how they come out,) it seems it is my duty to set the record straight, or at least to put on record my own thoughts on the issue.
http://newageislam.com/debating-islam/sultan-shahin/bringing-down-the-institution-of-hadees-from-its-pedestal,-equal-to-quran--no-matter-how-revered,-hadees-is-not-divine-islamic-scripture,-any-blind-faith-is-unwarranted/d/97819

Posted by Moderate Islamist here at 9:19 PM No comments:

ISIS 'Orders Genital Mutilation of 4 Million Iraqi Women and Girls'
Radical jihadists ISIS have apparently ordered the genital mutilation of up to four million women and girls in its occupied city of Mosul in northern Iraq,
http://newageislam.com/islam,-women-and-feminism/jessica-elgot/isis--orders-genital-mutilation-of-4-million-iraqi-women-and-girls-/d/98292
Posted by Moderate Islamist here at 3:42 AM No comments:


ISIL Militant Threatens To Destroy the Kaaba in Mecca, Kill All Pilgrims 'Who Touch Stone'
http://newageislam.com/islamic-world-news/new-age-islam-news-bureau/isil-militant-threatens-to-destroy-the-kaaba-in-mecca,-kill-all-pilgrims--who-touch-stone-/d/98022
Posted by Moderate Islamist here at 11:38 PM No comments: