Imran Khan, Tahirul Qadri and Maulana Fazl ur Rahman Out To Scuttle Zarb-e-Azb 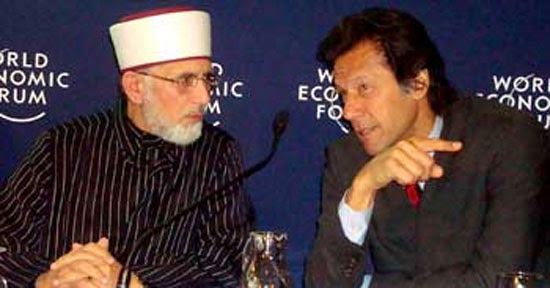 Operation Zarb-e-Azb was launched at the behest of the army because it was the army that was at the receiving end of the Taliban during their so-called ‘Peace Dialogue’ with the Nawaz Sharif government. The army has lost five thousands of its soldiers to the terrorism of Taliban. When the army could not take it lying any more,  they started the Zarb-e-Azb and perhaps the government also did not know about the army’s move till the last moment. That was why Nawaz Sharif told the National Assembly about the operation when it had already been launched. Jamaat-e-Islam Pakistan openly protested attacks on Taliban while Imran Khan had said that it would have been better if the opposition had been taken into confidence on the issue.
The army and the government knew that if the decision on the operation was made public in advance, different political and religious organisations and individuals would have tried to stall the operation by blackmailing the government and putting pressure from various corners. Since, the government, the army and general people were pushed to the wall by the Taliban as they made attacks after attacks on civilians and the army alike, holding the nation to ransom, the operation provided a much needed relief and it was welcomed from all quarters. The army destroyed many hideouts of the terrorists and killed more than 400 terrorists, both domestic and foreign. The opposition that wanted the strikes against the Taliban to be stopped kept silent for a while as expressing their support to Taliban would have invited the ire of the general masses and made them highly unpopular threatening their political career.
http://newageislam.com/the-war-within-islam/new-age-islam-edit-desk/imran-khan,-tahirul-qadri-and-maulana-fazl-ur-rahman-out-to-scuttle-zarb-e-azb/d/97981

Posted by Moderate Islamist here at 4:52 AM