Khwaja Gharib Nawaz (ra), an Epitome of Love, Countered All Kinds of Extremism 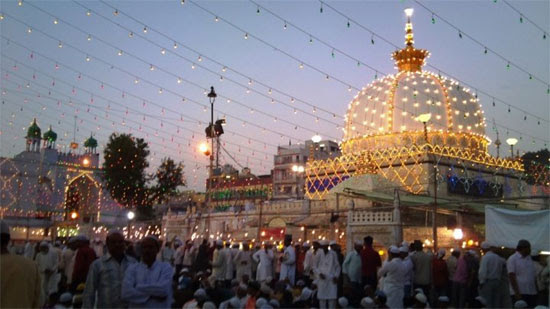 “The path of love is such, that he, who treads on it, loses his name and identity. Love is all-embracing and all-pervading: the lover's heart is a fireplace of love. Whatever comes in it is burnt and becomes annihilated. There is no fire greater in intensity than the fire of love. The sign of true love is manifested in obedience to and the fear of the Friend”1 said Hazrat Khwaja Moinuddin Chishti (ra), encouraging peace, tranquillity and countering every kind of violence, intolerance, terrorism, fanaticism and supremacism. To extinguish the fire of terrorism, hate and prejudice by the fire of love was the most important role of Khwaja Moinuddin Chisti (ra) in the Indian subcontinent.
Hazrat Khwaja (1139-1236), also known as Khwaja Sahib or Gharib Nawaz ra (the benefactor of the poor) is the fountainhead of Islamic spiritual and Sufi movements in India and Pakistan. He is said to have been drenched in love to Allah Almighty, gaining the prospect of divine pleasure, serving and providing the entire humanity with his spiritual bounty. His goal was not to proselytize anyone; rather he conquered the hearts of people around him. Muslims, Hindus, Sikhs, Buddhists, all experienced his spirituality; thus many of them themselves converted, transformed and awakened.

Posted by Moderate Islamist here at 1:50 AM