Syria: Between the Sufis and the Salafists 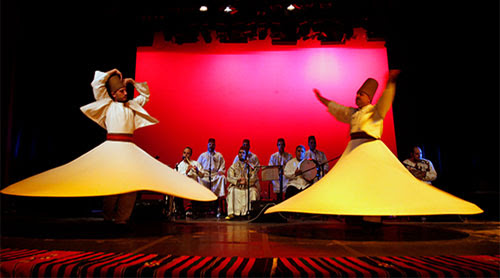 Syria's Sufi Tahleela band performs during the third annual Sufi Festival at the Royal Cultural Center in Amman, Oct. 12, 2010. (photo by REUTERS/Ali Jarekji)
The rise of the Salafist movement in its traditional jihadist forms has been a manifest phenomenon during the Syrian revolution. This is largely because the revolution grew in the countryside mostly occupied by the Salafist groups.  Meanwhile, the Sufi movement, which is vehemently opposed to the Salafist interpretation of Islam and has predominantly thrived in Syria’s urban cities, split into pro-regime, pro-opposition and neutral currents. Sufism has long been the mainstream Sunni Islam in Syria, but is now under serious threat as Salafism gains power and growing influence. This state of affairs raises fundamental questions about Syria’s religiosity, which during the past decades was dominated by Sufism. There are now questions regarding whether the religiosity of Syria's Sunnis will permanently adopt the Salafist trend or just temporarily.
Over the past decades, Sufism has been going off in different directions and divergent political trends, the most notable of which is the Zayd movement. It was founded by Sheikh Abdul Karim al-Rifai in the early 20th century. It took roots in Damascus’s conservative social circles and a network of mosques and seminaries.
But, the Zayd movement suffer

Posted by Moderate Islamist here at 3:17 AM