What characterizes the personality of a Dissident, Luminary or Revolutionary? Culture, Education, Environment, Family, Opposition, Militant Spirit, Reaction, Reflection, Religion, Revelation, Upbringing, Tragedy and the list goes on and on. The personality of these course changing, ground breaking and immortal beings may be influenced by some of the above mentioned traits but what contributes to the Immortality of their being and Message is to stand for what they consider as Truth, stay affirm on their Beliefs whether right or wrong and offer Sacrifices towards its achievement. It is what history has taught us from Socrates to the Last Messenger of Allah Prophet Muhammad (p.b.u.h) 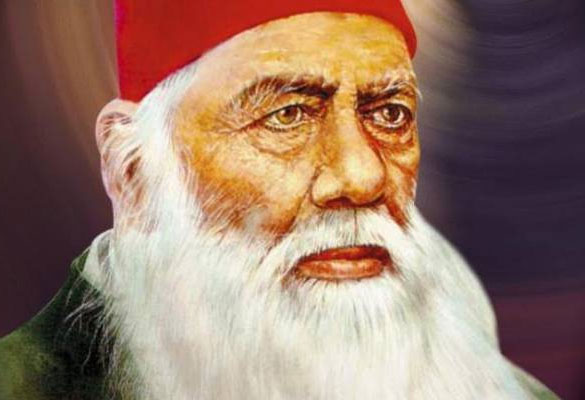 Since the last three-four centuries Muslims are at the ebb of their downfall which is more a result of their own shortcomings than that of the external Conspiracy. When the colonization of Muslim Lands began(though it is still continuing only its transition from direct into Neo-Colonization took place) to occur the Muslims as usual developed  a reactionary approach towards it and deemed every effort of the colonizer as an attempt to further prolong their illegitimate rule. The colonialism brought in its wake a new, innovative but alien system of education that too delivered in a Foreign Language. The dissidents, intellectuals, resistance leaders, revolutionaries and thinkers judged it correctly that it was to further enslave the minds and hearts of colonized, as a result they discarded this system of education enmass.

But was this the Ultimate Solution to bring back the glorious past? No, then what was the way out? Education and only Education, it was realized as the only solution by a solitary Voice in South Asia. This lonely proclamation was others than Sir Syed Ahmad Khan’s standing out from the crowd thus discarded as Utopian. To make Muslims realize the indispensability of education he had to pass through all the three stages as depicted by Arthur Schopenhauer regarding Truth i.e. at first he was ridiculed, then violently opposed but now he is being accepted as Self Evident. He is the only towering personality among the Muslim Revivalists and Social Reformers of subcontinent who in his lifetime materialized his dream of starting a college, which now is present in the form of Aligarh Muslim University (AMU), which is a premier institute which writes men. Sir Syed is the person responsible who made the Muslims Read, Write and promoted among them a Literary Spirit, though he was violently opposed for breaking the Norms of Conservative Society and Disturbing the Status Quo, but he fearlessly propounded “I write to you frankly; had God not guided me and brought me out of Taqleed(conservatism) and had I not devoted myself to making enquiries into the subject I would definitely have renounced religion”. This stance was unacceptable to the Clergy and the Status Quoists which earned him the title of “An Agent Of devil”. He firmly believed that only education can emancipate his fellow beings and save them from the Pawns of Exploiters “I believe it impossible for a man who is well acquainted with modern Philosophy and Science to believe in all those postulates that go under the name of Islam today. My young friends with English education will forgive me, but I have not come across any such with English Education who had complete faith in the whole of our customary Islam. As modern knowledge spreads-and, I am myself engaged in spreading it-people will begin to disbelieve in it. They will neglect it and turn away from it. I believe that these are not the defects of real faith, they are due to the wrong doctrines which have been intentionally or unintentionally allowed to tarnish the bright face of Islam”

These statements speak out his religious Ideology, which was Muslim to the core but what about the indomitable spirit to work for the empowerment of Muslims through education. His system did really produce luminaries with “Philosophy in their right hand and Natural Science in their left along with the Kalimah (There is no deity but God) crowing their heads”.

“There is a lot of work but no time. Neither have I the power to capture the Sun and extend the day’s duration, nor do I have the capacity to prevent it from rising in order to enable the night to continue. If I concentrate on one thing, other equally important things remain untouched”. This Declaration, Dedication and Desire to do something Noble for his people sets Sir Syed apart from many common men who drink, dine and die wasting their whole lives chasing the lower instincts of self without achieving anything great in life. They are so eccentric that their thinking never goes beyond their own petty selves.

Sir Syed’s whole life in toto and de facto has got innumerable valuable lessons for us to inspire, implement and impart further in our lives. One of the greatest lesson his life offers us is that we should never get cowed down by the resentment or opposition brewing against us if we stand for a noble cause which the narrow minded, status quoists and exploiters want us to shun form as it goes against their Interests, also because they can’t understand the message of higher goals their necessity and power to revolutionize the destiny of millions!!

Most of us deem it fit only to pay tribute to great men on their anniversaries or other functions but never try to understand the spirit of their message, mission and maneuvering, carrying it forward is a task which we can never ever think about? Thomas.W.Arnold pays his tribute to Sir Syed in the following Golden Words "From history it is known that in this world various great men have passed but among them there would only be a minority who have got such miraculous qualities and abilities. He(Sir Syed) at the same time was an Islamic research Scholar, Supporter(Guardian) of Knowledge ,Social Reformer of his Qaum, Politician, Writer and Essayist. In India where can you find an exemplary like him, neither he enjoyed great social status nor a huge amount of money and estate was at his disposal, still he emerged as the Uncrowned King of Indian Muslims. This rank before him wasn't achieved by any individual without the use of sword".

Are we the Spiritual Inheritors of Sir Syed's rich legacy?, who only shower tributes on him on 17 October every year and with the dawn of new morning forget every commitment we made during the previous night. Who are the real Spiritual Heirs of Sir Syed's legacy and who are willing to pass again through the same furnaces from which he emerged as a noble soul with a solid character? It is a million dollar question and Time being its best judge!!!!

Mushtaq ul Haq Ahmad Sikander is a Writer-Activist based in Srinagar, Kashmir

Posted by Moderate Islamist here at 8:47 AM