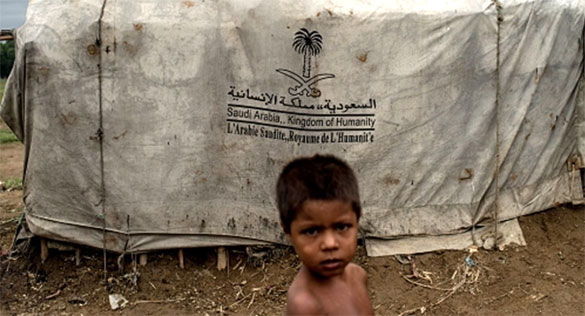 A boy stands in front of a tent donated by Saudi Arabia at one of the IDP camps in Sittwe, Myanmar [File: Jonas Gratzer/Getty Images]

Most of the Bangladeshi workers have returned to Bangladesh during COVID-19 lockdown and are waiting to return to the kingdom. The threat of Saudi Arabia has come at a critical juncture.

The Foreign Ministry of Bangladesh has said that it can issue passports only to those who held Bangladeshi passports previously but most of the Rohingyas did not belong to Bangladesh and have not even seen Bangladesh. 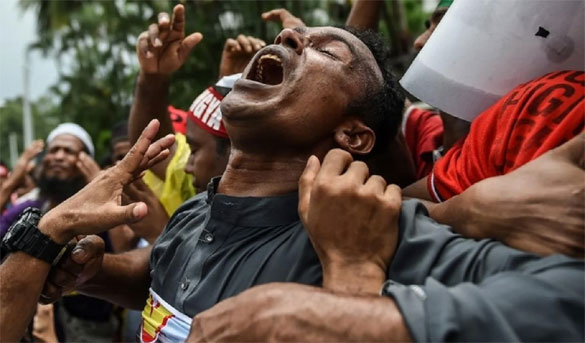 Rohingya refugees living in Malaysia shout slogans during a protest against the treatment of Rohingya Muslims in Myanmar, in Kuala Lumpur on 8 September 2017 (AFP)

Saudi Arabia is well aware of this Achilles' Heel of Bangladesh and has decided to exploit its weakness to offload its Rohingya burden to Bangladesh.

Most of the Rohingyas have come to Saudi Arabia in the 60s and 70s after the military junta of Myanmar came to power in 1962 and started persecuting Rohingyas. In 1982, the military government stripped Rohingyas of citizenship. The Rohingyas fled to Bangladesh in large numbers after their persecution in the 70s. During that period, thousands of Rohingyas also fled to Saudi Arabia. They arrived to Saudia Arabia via India, Bhutan, Nepal, Pakistan and, of course, Bangladesh with forged documents since they did not have Burmese passports.

In the 60s and 70s, King Faisal had showed mercy on the Rohingya refugees and had granted them residency rights on human grounds. The Rohingyas were granted residency papers even without proper travel documents because King Faisal had taken into ccosideration their plight. 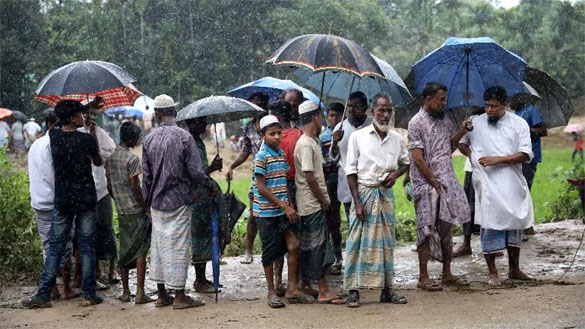 Many of the Rohingyas living in Saudi Arabia have been born, brought up and educated in Saudi Arabia and know about the Arabic culture and speak Arabic language fluently. They have every right to be granted Saudi citizenship. But on the contrary, the Saudi government wants this persecuted community to be deported to Bangladesh.

Earlier the KSA requested Myanmar government to issue passports to the Rohingyas but it declined the request on the ground that it did not recognise Rohingyas as citizens of Myanmar.

Saudi government has put thousands of Rohingyas in detention centres in Jeddah where they are physically and mentally tortured. They have been kept n the detention centre for one year to five years without any charges. 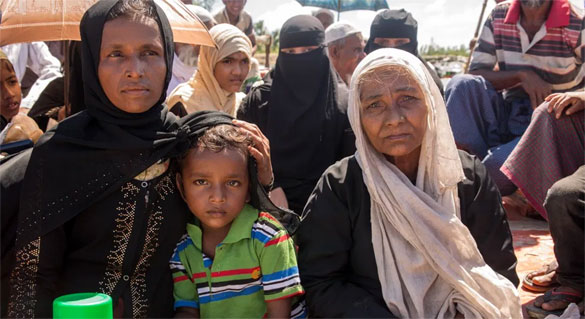 Some of them were put in "hot rooms" where the heat was unbearable and the authorities told them they will be taken out of the hot rooms if they broke their hunger strike. Because of these tortures, many Rohingya lost their mental equilibrium.

This treatment of the Rohingyas living in Saudi Arabia on the basis of residency papers granted by its own government is a violation not only of the international norms but of the Islamic principles on treatment of prisoners which it claims to uphold.

The UNCHR requested the authorities of Makkah to discuss the state of Rohingya refugees in Makkah but they did not respond.

The UN has earlier asked the Saudi government to grant Rohingyas refugee status but the KSA has been insisting that they are citizens of Bangladesh and so it sbould take them back.

But the reality is that Bangladesh is hosting the Rohingyas as refugees and opened its borders to give them shelter after they were persecuted in 1970. 400,000 Rohingyas took refuge in Bangladesh. In 2017, another 7, 40, 000 Rohingyas crossed over to Bangladesh to escape persecution. There are another 500, 000 Urdu speaking stranded Pakistanis living in refuee camps in Bangladesh whom the Bangladesh has given refuge.

This shows the humanitarian face of Bangladesh that hosts the biggest refugee camp in the world.

But instead of appreciating the troubles Bangladesh has taken to save the Rohingyas from persecution and starvation, Saudi Arabia has been pressuring Bangladesh to take another 54,000 Rohingyas which are not the liability of Bangladesh since they are not citizens of Bangladesh.

Saudi Arabia had raised the issue of Rohingyas with Bangladesh in February this year as well. Now that the migrant labourers are waiting to return and have been flocking to the airports for the visa, Saudi Arabia has upped the ante finding this an opportune time to make Bangladesh relent.

The leader of Free Rohingya Coalition, Ro Nay San Lwin has urged the Saudi government to renew the residency of the Rohingyas in the Kingdom.

Instead of trying to offload the Rohingya refugees of its land to Bangladesh, Saudi Arabia should pressurise Myanmar to take Rohingyas back and reinstate their citizenship. It should raise the issue on the OIC platform and find a political and diplomatic solution to the decades long issue. It is not an issue between Bangladesh and Saudi Arabia but is an international issue. Saudi Arabia has good relations with China and had even defended China on Uyghur issue. China has been defending Myanmar on Rohingya issue. Saudi Arabia should use its relations with China for a resolution of the Rohingya issue. As for the 54,000, Rohingyas kiving in Saudia Arabia, it should grant citizenship to them as they have been living in the country for more than fifty years and have assimilated in the Saudi society. After all they are Muslims.

Posted by Moderate Islamist here at 9:21 AM