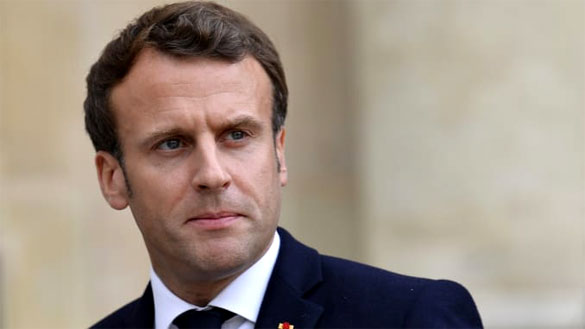 The President of France Emmanuel Macron in a speech disclosed his plan to curb growing radicalism and separatist trends in the Islamic society in France. In his speech he said that Islam was in a state of crisis not only in Franc but in the whole world and that he sought to liberate Islam from extremist and radical ideology and help the Muslims of France assimilate in the mainstream French society by ending ghettoisation of Muslim population and creating economic and social mobility in their areas.

His speech has generated large scale debate in the world Muslim community. Generally the Muslims have not taken his remark that Islam was going through a crisis positively. Many have taken to twitter and Facebook to criticise Macron for his 'wrong' and 'Islamophobic' perception of Islam and Islamic society.

But on a close analysis of his speech, it can be said that most of what he has said is based on his observation of the current state of affairs in the Muslim world and also on introspection.

He said that his government will bring a law that will seek to strengthen the secular values of France. However, the main thrust of his plan would be to 'liberate' Islam from the foreign influences and to curb the growing trend of radicalisation and separatism among the French Muslim society.

According to President Macron, the new law will give stop foreign funding of mosques and religious organisations of France, especially by Saui Arabia, Qatar and Turkey. Religious education will be eradicated from government and private schools. Imams of mosques will not be allowed to take training from abroad and foreign preachers will not be hosted in France. This seems to be based on experiences of Sweden, Philipines and other European countries where mosques and madrasas are funded by Saudi Arabia and Qatar in order to promote their the Wahhabi version of radical Islam that seeks to establish Shariah rule. Most of the preachers of these countries are graduates of the universities of these Islamic countries. Sweden has been the most affected by the liberal approach of the government towards the immigrant Muslim population resulting in the spread of ISIS ideology in the country. The law will also make sending all children completing three years to school restricting home schooling or religious teaching at home.

Macron said that the growing separatist trend among Muslims needed to be curbed because they sought to create a counter society (Shariah-controlled zone) considering their own religious laws superior to all others.

The decisions and observations made by Macron cannot be considered totally Islamophobic because he also urged the French people for introspection into why separatist and radical ideas were influencing the French immigrant Muslim population. He said that the majority French society was also responsible for the ghettoisation of immigrant Muslims as they were forced to live in segregated areas called banlieues which are impoverished suburbs of main cities. He blamed it on its inability to live together. Therefore, he stressed the need to create economic and social mobility in the segregated Muslim populations and to create diversity.

This is not the problem with France alone but in all the European countries as well. Muslims are considered outcastes and are forced to live in isolation where they create their own "Shariah zone". This ghettoisation in France had led to riots in immigrant Muslim population in 2005.

The total Muslim population in France is about 5 million which is around 10 per cent of the total population. Majority of the population consists of immigrants from the Maghreb, West Africa and Middle East. One hundred thousand Muslims are converts from ethnic indigenous French communities. Macron's apprehension is that these indigenous Muslims are being indoctrinated and radicalised.

President Macron's speech gives the indication that his government seeks to work towards the assimilation of the Muslim community by creating economic and social mobility in immigrant areas. It can be hoped that the poverty, unemployment and social insecurity of the Muslims will be addressed so that they lead a better life and do not feel left out. It is a fact that the social and economic immobility and ghettoisation of Muslims has caused poverty and unemployment which has driven to crimes. According to a report in the Washington Times, from 27 % to 70% inmates in different prisons in France are Muslims though they only constitute 10% of the total population. In jobs sector, they face discrimination as they have 2.5% less chance of getting a job in comparison to their Christian counterparts. About 37% Muslims say they have been harassed or verbally insulted in public. These are some of the areas of mistreatment of Muslims in France.

According to the new law, public display of religious affiliation will be banned.But this will not affect only Muslims but also Christians and Sikhs.

It is a fact that Wahhabi ideology is being promoted among the immigrant Muslim population in European countries and the ISIS and other extremist organisations have spread their tentacles in these communities, taking advantage of Muslim ghettos as there is less government surveillance and control. In recent years, incidents of terrorism have increased in France. The new law wiil gove more powers to the local authorities to deal with the extremist elements. But at the same time, President Macron has also made it clear that his government did not intend to stigmatise all peace loving Muslims and urged the French society to acquire a better understanding of Islam and respect the majority Muslim community which upholds the peaceful and pluralist ideals of Islam.

Posted by Moderate Islamist here at 9:58 AM