Reflections on an Islamist Radical Beheading History Teacher Samuel Paty in Paris for Displaying Cartoons Portraying Prophet as a Suicide Bomber: The Muslim Consciousness of Persona of Muhammad, the Messenger of God

The beheading of History teacher Samuel Paty in Paris on Friday evening by Abdoulakh A, an 18-year-old boy, born in Moscow of Chechen origin, is a repeat of numerous such incidences; if they can be called so, that have occurred in Europe recently where Muslims flock to better their lives, knowing very well what the Constitutional, Cultural and Religious norms of the countries they migrate to is like. Yet lugging the mental baggage that they should have left behind or binned it on arrival in the new country.

Not only that, but the expression of the same with renewed vigour brings out in all such cases the savagery and barbarism that is astounding to say the least, particularly when expressed in the name of the God – Allah u Akbar – who is supposed to be “The most Beneficent, the most Merciful”. The young man who was shot dead by the police during the heinous crime act of his is alleged to have shouted Allahu Akbar!. This has become the ritual of “love jihad” for Allah!

Also Read: Common-sense Accepts the Existence of a Creator of Universe That the Scriptures Too Concur, And That There Is Benefit in It for Mankind

The fact that this event occurred after Friday payers says a lot about the influence-centers of Muslims there and around the world. Not withstanding the statement of an imam of a Paris mosque Tareq Oubrou next day who told the press “A civilisation does not kill an innocent person, barbarism does." What a contrast! 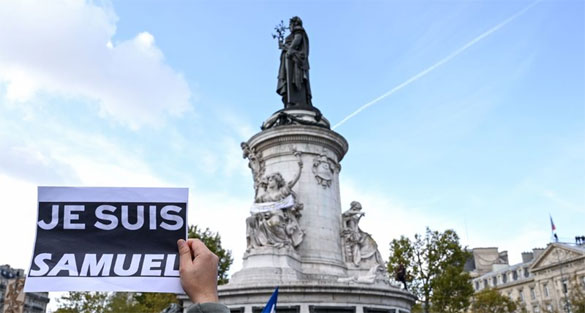 Demonstrators like the one shown here carried "I am Samuel" signs as they gathered on Place de la République in Paris on Sunday to pay tribute to slain history teacher Samuel Paty. Similar gatherings took place in several other cities as France reels from the attack.

What Is Then The Issue Here?

The cartoon of Muhammad shown by the French teacher to his class of students provoked the sensitivity and reverential sentiments of an 18-year-old young man to such an extent that he committed the murder of the teacher! Why?

Because, The Persona Muhammad-ur-Rasullullah has through the centuries acquired a secondary-god-like status in Muslim conciseness as believers in and followers of Quran. The scripture that was revealed to Muhammad commanding (umirtu) him NOT to partner, associate and attach to the Almighty Supreme Being (God) any other being; as all such beings or things are HIS creation and so the Creation cannot be equaled to the Creator.

This was by no means a new or unique message, as the Book vehemently stresses that it was propagated by all previous Messengers of God, forming a community of human messengers for the unity of mankind.

This god-like status of the Messenger Muhammad exclusively, no doubt stems from the Muslim creed laa ilaaha illallah muhammad-ur-Rasullullah. Contarary to the command of the Book. A creed for their declaration of Belief exclusive of all other messengers, but an Arab Messenger and in Arabic language, firmly embedding what is the universal message of Islam in Arabia, for Arabian monopoly. 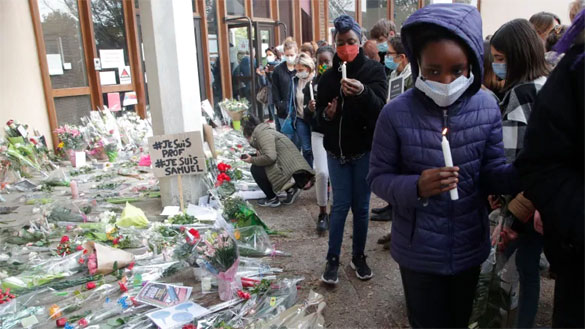 Girls light candles on Saturday outside the school where a slain history teacher worked in Conflans-Sainte-Honorine, northwest of Paris. French President Emmanuel Macron denounced what he called an 'Islamist terrorist attack' against the teacher, who was decapitated on Friday, urging the country to unite against extremism. (Michel Euler/The Associated Press)

In order to keep this discourse brief, for further argument from Quran, please refer in your spare time to: Muslim Majority Has Adopted Dualism: A Supreme Being and A Human Being Associate for Their Religion

Also Read:  Islam, as per Quran, Obliges Ulil Amri Minkum: Naturally All Are Equal under the Law but Theologically Some Are More Equal than Others

When a testosterone topped young person Abdoulakh A, an 18-year-old boy, is brain washed from the pulpit on Friday and promised in God's name multiple virgins in heaven, it should not come as a surprise that such savagery is committed on society which has firmly declared its norms to be quiet different to the boy's beliefs brought from homeland. What is more, when one has chosen of ones “freewill” to migrate to these different societal norms, where that society's own holy icons have no special privileges in their culture and constitution.

Why are the teachings of the likes of Imam Tareq Oubrou not have any effect on the larger community of Muslims there. Although the imam's statement precisely echoes the Book.

The answer must lie in the organisations that sponsors the brain washing of young ones, for its own agendas. Backed by unlimited monetary and other resources there is no shortage of hirelings and and rent-a-crowd of utter ignorant foot soldiers. Their brigadiers wallow in Europe, in luxury and elite religious status under the falsehood of serving the false Islam and its honour, to the utter shame of the real Believers.

Also Read:  Personality Cultist Religion is what all Muslims Practice but Name it Islam

Lastly it cannot be denied that these 'enlightened' and rich receiving-end countries in their generosity neglect their duty to protect their own law abiding citizenry from the influx of such deranged migrants from dysfunctional countries shamelessly ruled by their leaders; by not providing sufficient resources to their own authorities to thoroughly investigate migrants who wish to settle in the country. Thus making it difficult for those like the followers of Tareq Oubrou to integrate in their chosen country. There is no evidence that in these countries there was such religious provocation of Muslims in the past that is before the uninvited recent invasion of migrants. Why so now?

Also Read:  Essence of Rasuls' Sunnah Lost in Spirituality of Religion and Strategies of Politics

Admittedly, one must accept the fact that it is a very difficult task, to balance the international human-rights obligations of the government and the 'enlightenment' aspect of ones society. From a layman's point of view it seems that a concerted effort by governments is called for to assist with means the minority law abiding Muslim communities to voice their disagreements in safety and resist the preachers publicly who aim to disrupt the harmony of the nation. They, the priests and agent provocateurs should be exposed, shamed and punished according to the law of the land.

Posted by Moderate Islamist here at 9:20 AM