Saudi Arabia Sponsored UN-Resolution Against Sectarian Hatred And For Protection Of Religious Sites: Turkey And Qatar Conspicuous By Absence 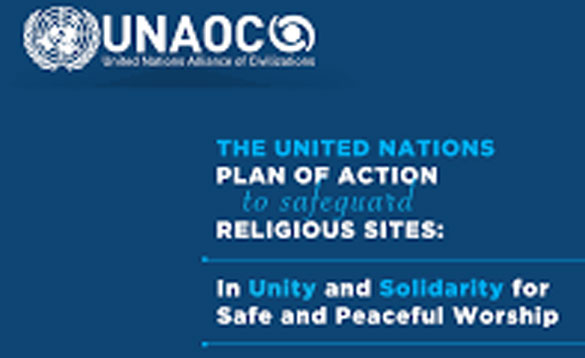 The United Nations recently adopted a resolution titled "Promoting a culture of peace and dialogue to safeguard religious sites". The resolution was presented by Saudi Arabia on behalf of a number of Muslim majority countries. The resolution aims to end sectarian hatred and violence and destruction of religious sites resulting from it. The resolution called for "strengthened international efforts to foster a global dialogue on the promotion of culture of tolerance and peace at all levels based on respect for human rights and for the diversity of religions and beliefs and such acts of violence against persons on the basis of their religion and belief and such acts directed against their places of worship as well as all attacks on and in religious places, sites and shrines that are in violation of international law."

The resolution also denounced any move to damage, demolish or convert any religious site.

It also invited the Secretary-General of the UN to hold a global conference on the issue.

The resolution has been adopted at a time when sectarian hatred is at its peak in Muslim societies and most of the time it results in violence and attacks on religious sites and shrines belonging to different sects and religions. Pakistan, Afghanistan, Nigeria, Mozambique, Niger and Middle East countries are centres of sectarian and religious hatred and violence.

During the Syrian civil war, the ISIS and its affiliates attacked religious sites and shrines belonging to Christians and mausoleums and graves of prophets and Sufis were destroyed by them. In Pakistan, Mazars and churches and temples are attacked on a regular basis. In Nigeria, Mozambique and Niger, the ISIS- affiliated terrorist organisations like Al Shabab and Boko Haram regularly kill Christians and Sufi-minded Muslims and destroy churches and desecrate mosques belonging to Sufi sect, calling their belief as "degenerate Islam".

Therefore, presenting a resolution against sectarian and terrorist violence against minorities by Saudi Arabia and adopting it by the UN is an important step but it also raises some questions on the sincerity and motive of the signatory countries on the issue.

The terrorist organisations active in these Muslim majority countries preach and practice a theology based on a radical interpretation of the Quran propagated and circulated by the Ulema of Saudi Arabia, Qatar and Egypt. Most of the imams of African and Asian countries are trained in Saudi Arabia, Qatar and Egypt and imbibe a conservative approach to Islam from them. Saudi Arabia also funds construction of mosques in African and Western countries which become centres of Wahhabi ideology. The Al Qaida, Boko Haram, Al Nusrah, Taliban and the ISIS subscribe to the Wahhabi ideology propagated and promoted by Saudi Arabia, Egypt and Qatar.

One striking feature of this resolution is that Turkey and Qatar have not signed the resolution. The reason is not far to seek. These two countries have showed support to the ISIS during the Syrian civil war and various Congressional reports have showed that Qatar has been a source of fundraising for the ISIS, Taliban and Muslim Brotherhood and other terrorist organisations.

However, Saudi Arabia is also not a saint. It, together with Qatar, had provided funding and support to the ISIS during the Syrian civil war. The Saudi Minister Bandar bin Sultan had brazenly acknowledged before the Russian President Putin that the terrorist organisations active in Iraq and Syria were controlled by Saudi Arabia.

If Muslim countries, particularly the Saudi Arabia really want an end to terrorism and to the sectarian violence, they don't need a resolution adopted by the UN. They can do it by taking long term steps of removing radical interpretations of the Quran and hadith from their religious texts and from their education system. They should first root out terrorist organisations from their lands and declare them un-Islamic. They should also stop using these terrorist organisations as pressure groups and tools of "strategic depth" as was done by Saudi Arabia, Pakistan and Turkey in recent years. Saudi Arabia used the ISIS during the Syrian War; Pakistan used the Taliban in Afghanistan and Turkey used the ISIS in Azerbaijan and Kurdistan.

The resolution seems more of a diplomatic exercise of Saudi Arabia against Turkey and Qatar. The absence of these two countries from the resolution strengthens this belief. If Saudi Arabia and twenty other signatory countries really want to root out sectarianism and terrorism from their lands, they should together form a group and start ideological and military campaign against these terrorist organisations. The UN and other European countries will always be there to support them. But they should take the initiative first.