During the initial period of Islam, Muslims of Makkah had faced resistance and opposition to their faith. As their opposition intensified with the growing popularity of Islam among Makkans, the people of Makka started harassing, torturing and persecuting the Muslims who were in minority and were weak.

Even after the victory of Makkah, the confrontation between the Muslims and the polytheists-Jews continued. The nature of this confrontation was more political than religious. Since the spread of Islam ran parallel to the growth of the Islamic state, Muslims of the later ages got the impression that use of force for propagation of Islam is supported by the Quran and hadith. This is the belief which is held and practised by the extremist ulema and organisations of the modern age. But the teachings of the Quran and precedents in Hadith negate this belief. 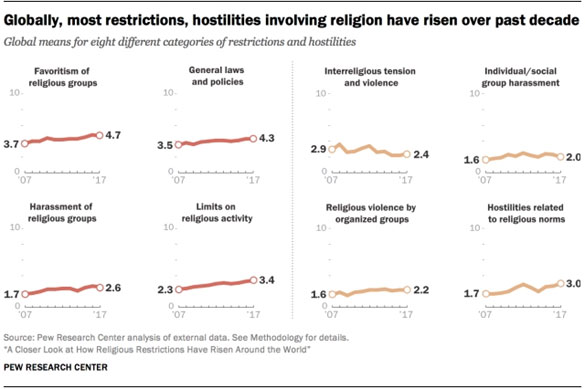 The Quran and Hadith support the use of force as a last resort and in self defence and it is mostly in political situation when an enemy country threatens the security and sovereignty of an Islamic country. But when it comes to the propagation of the message of Islam, the Quran and Hadith preach non-violence and peace. Quran does not support violence in the name of propagation of Islam or killing the non-Muslims and destroying their places of worship or shrines. Attacks on churches, temples, synagogues or monastries or other religious sites are not supported by the Quran nor does the Quran enjoin on the Muslims to use force to convert non-Muslims to Islam. The Quran famously says:

"There is no compulsion in matters of faith"(Al Baqarah:256)

The Quran advises Muslims only to convey its message to the non-Muslims peacefully and then leave the matter to them. If they turn hostile, the Muslims are advised to turn away from them. The Quran says:

"Had Allah willed they would not have been polytheists. We have not appointed you their keeper nor are you their maintainer."(Al An'am:107)

"Those mindful of Allah will not be accountable for those who ridicule it whatsoever ---- their duty is to advise, so perhaps the ridiculers will abstain."(Al An'am:69)

The Quran whenever advises Muslims to spread the message of Islam, it asks Muslims to practice perseverance, patience and tolerance and avoid confrontation.

"For had there not been for Allah's repelling some people by others, certainly there would have been pulled down cloisters and churches and synagogues and mosques in which Allah's name is much remembered."(Al Hajj:40)

To God every place where His name is remembered and chanted is dear and so He protects it from those who want to destroy it.

There is a Hadith that strengthens the belief that Islam does not support violence in the name of propagation of Deen.

Hadhrat Abu Hurairah narrated that Fudhail bin Amro ( Headman of Douss tribe) came to the Prophet pbuh and said, "O Prophet of God pbuh! The people of Douss disobeyed Allah and refused to be Muslims. Please curse them." People thought that the prophet pbuh would now curse them. But he pbuh prayed, "O God! Guide the people of Douss on the right path and bring them to me."(Sahih Bukhari: Kitab ud Daawaat: 794)

This shows that the holy Prophet pbuh did not even curse the polytheists of the Douss tribe, leave aside fighting them in order to convert them to Islam.

The use of violence against the followers of other religions by extremist groups of Muslims and the destruction of their religious sites is, therefore, against the teachings of the Quran and Hadith.

Posted by Moderate Islamist here at 6:42 AM