Holy Quran - God’s Word, Man’s Interpretations: Translators Have The Power To Mislead Gullible Readers Particularly If It Is Conducted By Orientalists Or Qadiyanis

God’s Word, Man’s Interpretations: A Critical Study of the 21st Century English Translations of the Quran 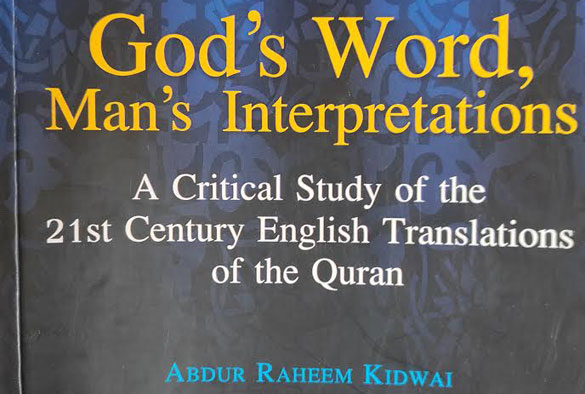 Quran as the Holy book of God was revealed for the benefit of whole humankind. Its message is universal and immortal. It was revealed in Arabic language and its first recipients were the Arabs. Later with the spread of Islam, Quran being the primary text from which the principles of Islam are derived was translated in different languages.

Arabs today do not comprise as the majority among Muslims because the population of non Arab Muslims exceeds them. Non Arabs certainly cannot understand Arabic as it is not their mother tongue, native or indigenous language. Further majority of the Muslims do not have the time, money and resources to understand Arabic as a secondary language, hence translations of the Holy Quran become inevitable.

Due to the spread of colonialism and evolution of Orientalism English translations of Quran were carried out by a number of non Muslim scholars who had some understanding, competence and expertise of the Arabic language. These translations are in circulation and many have run for several editions. These English translations had not been critically analyzed and studied judiciously so that their merits and flaws could be brought to the fore.

Abdur Raheem Kidwai, an academic, writer and scholar whose scholarship on Quran is marvellous in his new work has analysed thirty two translations of the Quran published in English between the years 2000-2017. The translations of Holy Quran are being published at a very fast pace unlike the past that depicts the interest in the revealed book, particularly the English speaking and writing class. But translators have the power to mislead gullible readers particularly if it is conducted by Orientalists or Qadiyanis. Also some interpretations amount to rendering Quran as a dated work terming its message as impractical and cumbersome baggage (P-12).

This has created issues for the readers leading to obstacles in understanding the universal message of Islam. Although the discipline of translation is now dominated by Muslims that indeed is a great achievement, still issue like plagiarism galore many translations. Further sectarianism and justifying a certain ideological point of view while translating and interpreting the Quran tries to undermine the real message of the Holy book. Although this shortcoming can be overcome by comparative translations that are being undertaken which help retain the spirit of the Quran.

Commenting about various translations of Quran Kidwai observes that Thomas Cleary’s translation The Quran: A New Translation depicts the affinity between Quran and Buddhist religious tradition. M A S Abdel Haleem’s translation is quite readable with simple English.

The issue of plagiarism is found among many translations and the manner in which Kidwai points it out depicts his mastery over the subject and his wide range of reading. He is aghast at such an atrocity done with the word of God like Syed Vickar Ahamed indulges in this unethical practice and does not even bother to acknowledge the contribution of his predecessors whose work he quotes without naming them. Similarly Alan Jones translation is spiteful and Islamophobic as he claims that Quran is just a copy of Jewish and Biblical scriptures.

Kidwai comments about the merits and flaws of Maulana Wahiduddin Khan’s translation of the Quran that is now widely distributed. Many like Assad Nimer Busool who despite not belonging to the clergy or scholarly class has translated the Holy Quran though it has its own shortcomings.

A trend that has been started by a reverted Muslim Dr Maurice Bucaille in his book The Bible, the Quran and Science has been termed as Bucailleism, who decide the divinity of the religious books based on the scientific facts. This is not a healthy trend as science certainly believes in paradigm shifts and further the subject matter of the divine books is not science, hence this trend needs to be criticized. Kidwai condemns such an exercise, “While taking a cue from its spirit of inquisitiveness and enquiry, early Muslims advanced a great deal the frontiers of knowledge, including those of the natural sciences and medicine. However, reading current scientific concepts in the Quranic text is not a desirable exercise.” P-79

The translation of Professor Tahir Ul Qadri too has its own problems as his exegesis is repeating from the predecessors like Peachy Daoud William (P-85), some translations of the Quran have been out rightly rejected like Kader Abdolah’s The Quran: A Journey. On the other hand some like Safi Kaskas and David Hungerford’s The Quran with references to the Bible, has been described as a noble, good and scholarly accomplishment.

Prof. Kidwai through this work has depicted the merits and shortcomings of different English translations published in last more than one decade. It is a serious study as Prof Kidwai also depicts the background of the translator that is indeed essential to understand his/her motives of translating the Holy book. Translation indeed is a cumbersome activity and when it comes to the Holy Quran, the translators need to be extra cautious. The flaws do creep in despite the caution as human efforts are bound to have errors. Still the attempts of these translators who intend to help people understand the real message of Islam need to be applauded. Others who undertake the translation project with malicious intentions do get exposed as this work of Prof. Kidwai proves.

This work certainly is an important addition to the Quranic studies and it is an essential read for anyone who needs to select a best translation of Quran for understanding the Divine words and paving way for his salvation. This work of Prof Kidwai is a continuum of his pioneering efforts to understand the word of God. The book is an essential read for anyone genuinely interested in the Quranic studies. Prof. Kidwai needs to be congratulated for this important work related to the understanding and analysis of English translations of the Holy Quran.