Politics of Islam and Its Ideologues: From the Beginning to Shah Waliullah

The relationship of Islam with politics has engaged minds of different scholars in every age. For Islamic revivalist movements politics and Islam are inseparable. If Islam is divorced from politics then according to ideologues of Islamism fundamental principles of Islam cannot be realized. They interpret Deen as a system of life and politics is the embodiment and zenith of this interpretation. The whole body of Islamic texts for these ideologues is a road map for establishing the Islamic state. On the other hand after the European enlightenment and renaissance there are few voices that are now labelled as progressive Islamists who uphold the western notion of secularism, and believe in the separation of the religion and politics. These two schools of thought among Muslims have been clashing with each other quite regularly particularly in the Muslim majority countries. 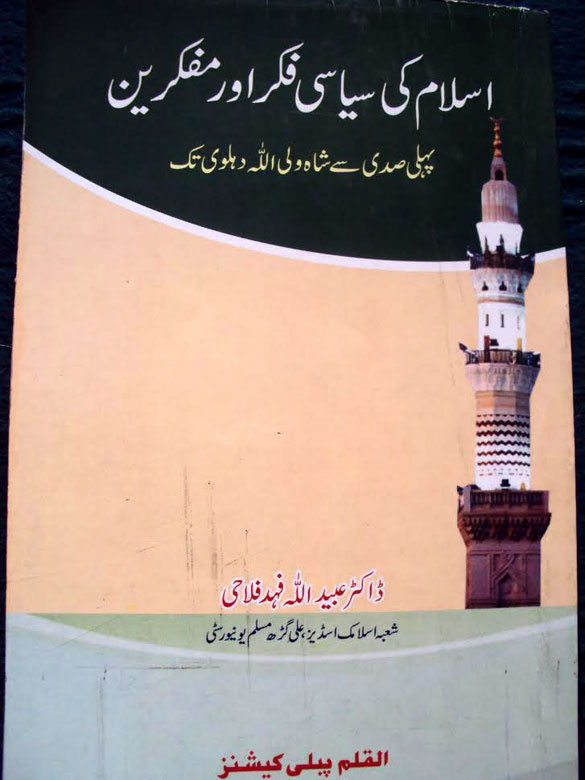 The water tight compartmentalization of religion and politics certainly can never be a feature of Muslim politics because there never was a rebellion against the institution of religion and clergy in the Muslim world. The Muslim clergy did certainly play a divisive role many times impeding the progress but their brutalization of scientists and scholars never surpassed the levels of European Christian clergy. So in the Muslim world we do not witness any serious overt confrontation between religion and politics. Although most of the Muslim rulers pay a lip service to the principles and message of Islam, but they maintain a public reverence towards it. In fact most Muslim authoritarian regimes, monarchs and dictators have been labelling every opposition, dissent and Islamic revivalist movements as enemies of Islam and agents of Zionism.

The book despite its engagement with politics of Islam, its protagonists and ideologues does not engage with these pertinent questions despite the fact that in Shah Waliullah’s time the impact of colonialism coerced him to declare subcontinent as Darul Harb (Abode of War). The author of the work Prof. Obaidullah Fahd Falahi is renowned scholar of Islam and his expertise in the field of political Islam is beyond doubt. He has authored more than seventy works on different aspects of Islam and this book very well depicts the specialization of the Prof Fahd. He appears to be critical of the west and observes that due to the egoism embedded in the western civilization they consider themselves best than the rest. This criticism is reinforced again in the first chapter of the book that is titled as the Misconceptions of the West about the political system of Islam. Prof. Fahd has carried a literature review of the books engaging with the political thought of Muslims and observes that labeling Islam or Islamic movements as fundamentalism is wrong as fundamentalism basically is a Christian phenomenon. It is true academically that fundamentalism as a movement did appear in Christianity but then it did find a fertile ground among Muslims also. Various groups take pride in being described as fundamentalists so if certain biased journalists and academics along with Islamophobes are painting all Muslims as fundamentalists they too have certain grounds. Prof. Fahd also criticizes the renowned orientalist T.W Arnold about his views related to caliphate.

The second chapter deals with Fundamentals of Islamic politics and rules of governance. The Quranic principles of politics, relation between religion and politics, the prophetic example of politics and how the four caliphs conducted the politics has been dealt in this chapter. But again the different contentions and contours of this politics need more deliberation, particularly the internecine battles that started with the killing of the third caliph Othman. These internecine battles continued later on till the battle of Karbala. Further with the assassination of fourth Caliph Ali the culture of monarchy and kingdoms became a reality in the Muslim world. Most of these monarchs and authoritarian kings exploited Islam and used clergy for achieving their own vested interests. This trend still continues in the Muslim world.

The third part constitutes the biographical sketches of fifty six Muslim scholars and review of their works dealing with politics. These scholars have written about politics, its principles and how Islam enshrines and provides guidelines about different aspects of politics. This chapter forms the major portion of the book. Prof. Fahd deals with Arabic, Persian and Urdu works of these writers. He very aptly provides the gist of their works while being critical at the same time.

Politics of Islam, Islamic politics and political Islam are different categories that will continue to dominate the discourse of Islam for more decades to come. This is a very timely book, despite its shortcoming of concluding its canvass with Shah Waliullah and since then numerous Islamic ideologues have politicized Islam and presented a completely new theory about the need for establishing an Islamic state. Further the conclusion of the work is very short that fails to highlight the contours of the Muslim political thought holistically. Still this flaw does not discount the academic merit of the work. It is an essential read for anyone who intends to understand the relationship between Islam and politics as well as understand the major writers and proponents of an ideology that today is known by the title of political Islam.

Both the author and publisher needs to be congratulated for bringing out this important work. We expect that Prof. Fahd will write an additional volume where the works of modern thinkers and ideologues of political Islam will be engaged with. This book needs a sequel to provide a complete holistic picture about the relationship between Islam and politics since Prophetic to our current times.

M.H.A.Sikander is Writer-Activist based in Srinagar, Kashmir

Posted by Moderate Islamist here at 5:08 AM