Maulana Wahiduddin Khan is one of the prolific scholars of Islam. He has published more than one hundred volumes on different aspects of Islam in vernacular Urdu. His works encompass all the aspects of Islam. His philosophy of non violence and inter faith dialogue has ruffled many feathers. Inspite of opposition he still continues to write about different aspects of Islam and its message of non violence. Some of his works have been translated in other languages too. The current book under review comprises some of his Urdu writings on Jihad, Peace, Non violence and Interfaith dialogue selected, edited and translated by Yoginder Sikand, a scholar of repute. In his Preface to this book, Sikand writes about his motive of undertaking the task, “I was of the firm belief that in today’s context, characterized both by heightened Islamophobia as well as extremist self styled jihadist groups that are playing no small role in contributing to Islamophobia by engaging in terrorist activities and spreading hatred for non muslims, it was crucial to bring to the notice of the wider, non Urdu knowing public some of the Maulana’s invaluable writings on the subject that have not as yet been rendered into English.” (P-viii) 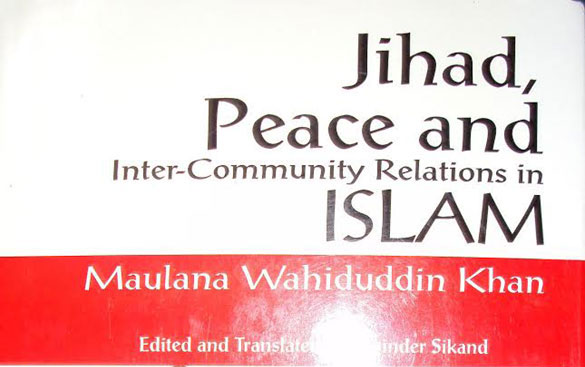 The Introduction provides the reader a glimpse of Maulana’s life and works. Maulana has been critical of the violence initiated and operated by the non state actors and same can be attested from this statement, “Today, the various violent movements in the name of jihad being engaged in by some Muslims are of two types: either guerrilla wars or proxy wars. Both sorts of war are completely illegal according to Islam. Guerrilla wars are unacceptable in Islam because they are led and conducted by non state actors, not by any established government. Likewise, proxy wars are unacceptable in Islam because the governments behind them do not issue a formal and open declaration of war.” (P-8). It is again reinforced by Maulana, “According to the Islamic Shariah, only an established government has the prerogative to declare war or physical jihad.” (P-12) But one thing Maulana seems to overlook is the fact that most Muslim governments are corrupt and history is a witness to the fact that for their own vested interests they have exploited the concept of Jihad. Furthermore the roots of modern Jihad go back to the Cold war when Jihad was granted an impetus by the imperialist ambitions of U.S.A. Maulana is aghast at the silence of muslim majority who do not condemn the terrorist acts committed by a minority of violent non state actors in the name of Islam.

Maulana during his initial days was associated with Islamic Revivalist Movement, Jammat e Islami, but then he turned into a critique of its ideology writing few tomes about what he terms as the political interpretation of Islam. Maulana has very well described the predicament of Islamic Revivalist Movements as “The ideological perspective that the founders of the Ikhwan ul Muslimin and the Jamaat e Islami created themselves was against the Shariah as well as against nature. Unnatural ideologies such as this inevitably begin with violence and end in hypocrisy. As long as people are hypnotized by their own romantic ideas, they remain so zealous in the cause of their supposed ‘Revolution’ that they can even consider suicide-bombing as legitimate, wrongly giving it the name of martyrdom. But, when the hard rock of reality forces their zeal to cool off, they resort to sheer hypocrisy: that is, at the intellectual level they continue to cling to their ideology, but in practical terms, they fully adjust to reality in order to protect their own worldly interest.” P-27

The question of communalism for Maulana is deeply related to the lack of intellectual and social awareness and the only way to resolve the religious differences is to follow one belief system while respecting all faiths. Tolerance and acceptance of differences alone can ensure peace in a plural society. There is a dire need for Hindu-Muslim dialogue in India and Maulana is aware about its essence and the need to engage with them. For Maulana using the term like Kaafir for Hindus is far fetched creating ruckus between the two communities as it is a term reserved only for the disbelievers of Mecca who existed during the time of Prophet Muhammad (pbuh) and even the Holy Prophet detested from using it.

Add to it the juristic terms that divide the world into the abode of Islam, War, and Disbelief and for Maulana these are not Quranic terms, “In other words, the use of the terms Dar Ul Islam, Dar Ul Harb and Dar ul Kufr, is not permissible. These terms represent a wrong innovation (Biddat), rather than being a Prophetic practice (Sunnat).” (P-57) To replace these terms Maulana coins the terms Darul Dawah or Darul Insan. Also the tussle as enshrined in Ghazwat ul Hind (War against India) too needs to be countered through an ideology.

Maulana has been a life long advocate of Ijtihad (use of critical thinking) and condemns blind imitation (Taqlid), and Ijtihad requires criticism and in its absence it certainly cannot emerge. So muslims have to make a choice between Ijtihadi and Taqlidi mindset. Maulana is critical of the medieval jurisprudence on various accounts as it developed and flourished when Muslims had political power so it has no understanding about how muslims can exist when out of power or being a minority. Plus the books of this period of jurisprudence have no conception of peaceful struggle (P-78). Also these works have no chapter about Dawah (calling others towards Islam). Even a scholar like Shah Waliullah Dehlavi is not spared from criticism as Maulana says that he was not aware about the advent of western democracy and was bound by contours of medieval Taqlid.

Overall these essays offer a fresh perspective about different issues, but the roots of modern Jihad, communalism and Interfaith dialogue need further exploration. Jihad and culture of violence among muslims has variegated roots. Political context, poverty, illiteracy and resistance to imperial ambitions alongwith exploitation by the clergy could have offered a nuanced view about the violence perpetuated by non state actors in which muslims mostly become the cannon fodder as well as victims.

M.H.A.Sikander is Writer-Activist based in Srinagar, Kashmir

Posted by Moderate Islamist here at 5:51 AM