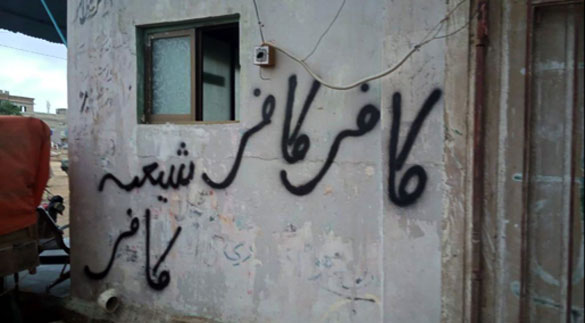 But the sudden rise in hatred against Shias of Pakistan since the first week of September after Muharram gives foreboding of the surge of violence against the community. Already a young shopkeeper named Qaiser Abbas was shot dead by an unidentified assailant in Khaybar Pakhtunkhwa on 6 September and it seems to be the beginning.

Though the militant Sunni organisations and extremist mullahs have always run a campaign against Shias declaring them kafir, this year's Shia mourning processions in which some Sahabas were openly vilified by Shias provided them the justification for their anti-Shia tirade. The Ashura Juloos were broadcast live on TV and the Shia clerics vilified some holy companions of the holy prophet pbuh openly creating an atmosphere of hate. This gave the anti-Shia Sunni brigade the opportunity to mobile the support of Sunni Muslims. Rallies were organised by extremist Sunni organisations in Karachi, Islamabad, Lahore, Qasimabad and other cities demanding punishment and even death for those who committed 'blasphemy'. In these rallies mainstream Sunni organisations like Jamaat Ahl-e-Sunnat, Tahreek-e-Labbaik Pakistan, Jamiat-e-Ulema Pakistan, MQM, Jamiat-e-Ahl-e-Hadees, Ahl-e-Hadees Youth Force took part. Sipah-e-Sahaba, a banned militant outfit whose motto is killing Shias has also been active in these protests. Banners of Sipah e Sahaba were seen in these rallies.

The rise in anti -Shia hysteria in Pakistan can be gauged from the fact that in July, the Punjab Assembly passed Tahaffuz e Buniyad-e-Islam Bill (Bill for Protection of the Foundation of Islam) and in August more than 40 Shias including a 3-year-old Shia child were booked under the law.

The state machinery, instead of acting in a neutral way, sided with the Sunnis. The Prime Minister Imran Khan tweeted blaming the Shias covertly and warning them of consequences and strict action. The Chairman of government backed Ruet-e-Hilal Committee, Muneebur Rahman participated in a rally which was also participated by banned militant outfit Sipah-e-Sahaba and demanded that sects should be declared in the next census and warned that if action was not taken against the blasphemers, Sunnis could turn violent. The leader of the Tahreek-e-Labbaik Pakistan Abid Mubara even threatened to behead the blasphemers. The Sunni ulema have demanded that a bill for protection of the honour of Sahaba be passed by the government.

Fearing a backlash from Sunni Muslims, no political leader has criticised the Sunni ulema who have been organising rallies against the Shias and threatening to hit the streets making provocatory remarks against a particular community. Only the President Arif Alvi has issued a guarded appeal to the ulema to abstain from provocative remarks against a particular community. He asked the ulema not to indulge in Takfeer (declaring someone infidel) and emotionally charged speeches. He said that differences based on ignorance cause strife.

In this Shia-Sunni schism, Shia religious leadership is equally to blame. No community has the right to hurt the religious sentiments of others in the name of freedom of expression or freedom to profess one's religion. There is no wisdom in vilifying religious figures of the majority community and broadcasting the programme live on TV. The imprudent and extremist mullahs of the Shia community have provided the militant Sunni elements with the opportunity to heighten the anti-Shia sentiments.

Another important point to be noted by the world community is that Pakistan has been put in the grey list of FATF due to its involvement in money laundering and terrorism. Pakistan has been suggested to take 27 steps to be removed from the 'Grey List". One of them is taking action against terrorist organisations and terrorists. But during these anti-Shia rallies, the terrorist organisation Sipah-e-Sahaba has openly participated and the representatives of the government like Muneebu Rahman have joined them threatening a minority community. The participation of Jaish-e-Mohammad can also not be ruled out. How can then Pakistan claim before the FATF that it is taking action against money laundering and terrorism? Who is funding these rallies and campaigns?

If Pakistan is really serious about rooting out sectarian and extremist elements from Pakistan, it will have to take judicious steps against militantism and terrorism. Both the Shia and Sunni mullahs should be reined in because they thrive on the sentiments of the followers of their respective communities. In short, they thrive on hate. The government should reign these hate mongers from both the communities.

Donate Now
Posted by Moderate Islamist here at 7:18 AM