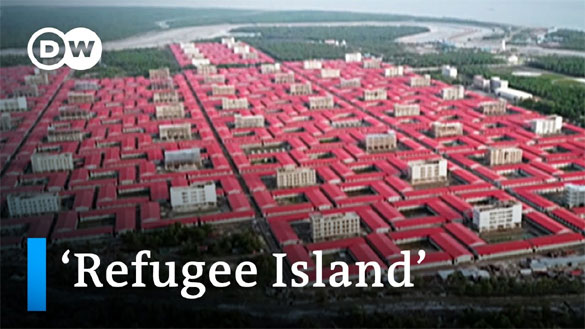 Defying objections from tbe United Nations and humanitarian groups, the Bangladesh government on Tuesday shifted more than two thousand Rohingya refugees from Cox Bazar refugee camp to Bhasan Char Island on navy ships. These refugees reportedly had agreed to shift to Bhasan Char. This was the second batch of refugees shifted to the island. On 4th December, the first batch of 642 refugees had been shifted.

But the United Nations has expressed reservations over the safety and security of refugees on the island. It had sought permission from the Bangladesh government to carry out technical and protection assessment but the Bangladesh government did not gve it the permission. This has raised serious concerns over the security of refugees on the island. The Human Rights Watch has described it as a De Facto Prison Island. The island can be reached after 3 hours of journey by boat. This makes the island an open prison.

In November the Bangladesh government took 40 representatives of 22 NGOs to a guided tour of the island. They reportedly expressed satisfaction on the arrangements on the island.

Earlier 300 Rohingya refugees who were trying to go to Malaysia by boats were trapped in the sea. Those refugees had been taken to Bhasan Char.

The Bangladesh authorities claim that from the accounts of refugees shifted earlier, the refugees have learnt about the satisfactory arrangements in Bhasanchar and so many Rohingyas have voluntarily shifted to the island. 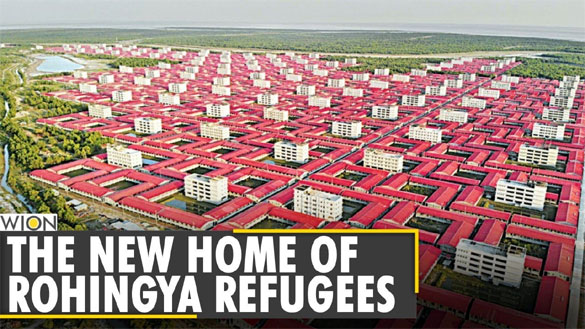 However, earlier the refugee women who had been taken to the island against their wish had said that arrangements of food and living conditions there were very poor. The security personnel appointed there even molested some women. They complained that the water provided to them was dirty. They wanted to return to the Cox Bazar camp.

The UN has said that without the technical and protection assessment, it cannot determine it can start its operations there.

Since the UN has not approved of the shifting to tbe Bhasan Char Island, donors have backed up and it has resulted in lack of funds to the NGOs working among the refugees. For example, one of the imoprtant NGOs, Caritas Bangladesh has backed up due to paucity of funds as donors have raised concerns that humanitarian principles were not being followed by the Bangladesh government.

The refugees are concerned that those who will shift to Bhasan Char will not be able to meet their relatives living in camps in the mainland.

The 22 NGOs have agreed to work on the island but there is a possibility that half of them will have to back out due to unavailability of funds from donors. This will create problems for the refugees. The government will provide food for the initial two months. After that the refugees will prepare their own food. They are being given packet food. The refugees cannot buy essential food grain as there are no shops there.

In the Cox Bazar refugee camps, many refugees run their own shops or do small jobs to make a living. But on the island they do not have that freedom.

In times of emergency, like clashes between criminal gangs in the refugee camps in Cox Bazar, refugees would escape to other camps to take shelter. But in Bhasan Char, they won’t be able to escape if there is bombing or arson between criminal gangs. They will simply be at the mercy of the criminals, extortionists and terrorists.

The concerns raised by the UN, Human Rights Watch or the NGOs are not unfounded. In the refugee camps in the mainland drug mafia like Munna gang or Rohingya terrorist group ARSA are active. Due to poor security arrangements in the Cox Bazar refugee camps, often there are incidents of abduction, murder, extortion and arson. They have made the life of the refugees a hell. The Bangladesh government has not been able to clear the camps of the drug mafia or terorists because the police and the security personnel are on their payroll.

Sometimes the criminals and terrorists attack on the security personnel posted in camps and take away arms and ammunition.

If this is the situation of the security and safety in the camps on the mainland which is easily accessible to the government authorities and the security forces, one can imagine what the security and safety situation was going to be on the island which is not easily accessible. A boat takes 3 hours to reach the island. Suppose if there is a terrorist attack on the camps, security reinforcements can’t reach there immediately. The police post set up there will not be sufficient to deal with ARSA terrorists and drug mafia or extortionists. The terrorists and drug mafia will run riot and terrorise the refugees with impunity.

These are the reasons the Bangladesh government has been fighting shy of the UN. The government will leave the refugees at the mercy of terrorists and drug mafia. There will be no one to listen to their grievances and come to their rescue.

The three thousand Rohingyas who have voluntarily shifted have shifted to Bhasan Char because the camps in Cox Bazar were over overcrowded and because of murder, abduction, arson and extortion by the criminals and terrorists active in Cox Bazar camps. But where will they go if they face the same situation on the island. And if the Bangladesh government was not able to deal with the ARSA terrorists and drug mafia active in the Cox Bazar camps how does it claim to deal with them in the far off island.

Therefore, before shifting the Rohingyas to Bhasan Char, the Bangladesh government should build a fool proof security structure on the island to prevent the entry of criminal elements on the island and to deal with them on the island. It should also run regular boat services betwee Bhasan Char and mainland Chattogram to enable the refugees to meet their relatives on the mainland or to go for necessary work or for livelihood to the mainland. It should not be an open prison for the hapless Rohingyas. The UN should pressurise the Bangladesh government to follow humanitarian principles and address all the problems faced by the Rohingyas.

Posted by Moderate Islamist here at 5:42 AM