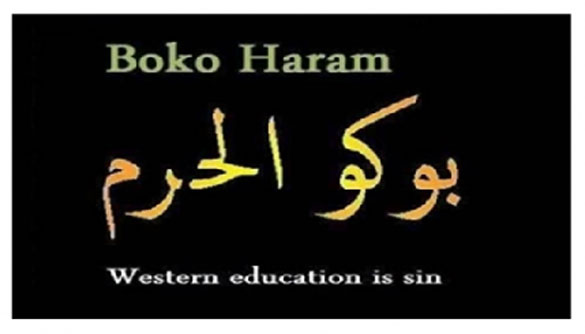 On the issue of blasphemy, the entire Muslim world stands up in protest and condemnation and leaders like Mahathir Mohamad even go as far as saying that it's the right of the Muslims to kill millions of French people, protests are staged in many Islamic countries but no word of protest was heard from any part of the Muslim world when the Boko Haram attacked a "science"school in Nigeria on last Friday and kidnapped more than 300 students. Some of them were lucky to escape to safety while the fate of the kidnapped students is unknown. The most unfortunate part of this tragedy is that the Nigerian President Muhammadu Buhari initially denied the involvement of Boko Haram in the attack giving them a clean chit but Boko Haram smeared his face black by claiming the responsibility of the kidnappings one day ago. Still the security officers are not directly affirming that the attack was carried out by Boko Haram. They say that bandits who may have links with Boko Haram had carried out the attack.

The reason for this is obvious. The country's armed forces are not able to control the terrorist group because of large scale corruption in the rank and file of the Nigerian military. The defence forces are poorly equipped and their morale is low. They don’t even have radios and armoured vehicles. The funds released for the procurement of equipment are skimmed by the military officers. The people are angry over the government's failure in reigning in Boko Haram.

Therefore, acknowledging the involvement of Boko Haram may cause another backlash from the people. 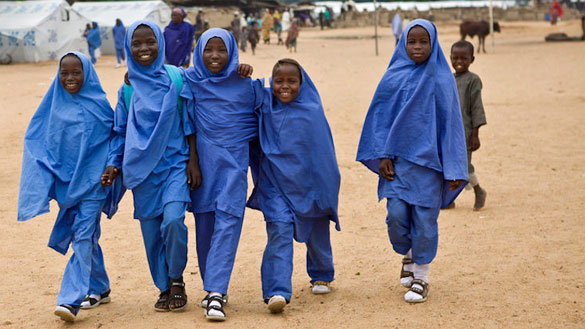 Young girls walk to school in Bama camp in northeast Nigeria. Girls have been particular targets for Boko Haram militants and many were severely traumatised by years of violence — Photo credit: UNHCR / Helene Caux

It’s not the first time that the Boko Haram has carried out an attack on a school. In 2014, it had attacked a girls' school in Chibok and kidnapped 276 girls. 100 girls are still missing. They have probably sold by Boko Haram into sex slavery.

Boko Haram in local language means Western Education Haram (forbidden by Shariah). This group follows the Salafi Wahhabi ideology and aims to "purify Islam" in Nigeria. Its founder Mohammad Yusuf who was killed by the Nigerian military in 2009 was opposed to western education and science. He believed that the earth was not a sphere and that rains did not result from evaporation but were directly sent down by God. Its another ideologue Mohammad Marwah was a self-proclaimed prophet and disapproved of reading of any book other than the holy Quran.

In 2015, the group joined the ISIS and since then it calls itself Islamic State of West Africa and its cult leader is Abu Baker Shekau.

After Boko Haram's attack on a girls' school in 2014 Grand Mufti of Al Azhar Sheikh Ahmad al Taiyeb, and some political leaders of Egypt had condemned the attack and had said that the act of Boko Haram contradicted the principles of Islam. But after the Friday attack by Boko Haram no word of condemnation has come from the Sheikh of Al Azhar or other leaders and Muftis of the Arab world probably because now Biko Haram is a part of the ISIS and it claims to fight for the establishment of Khilafat in Nigeria. This speaks of the hypocrisy of the Islamic muftis and scholars. 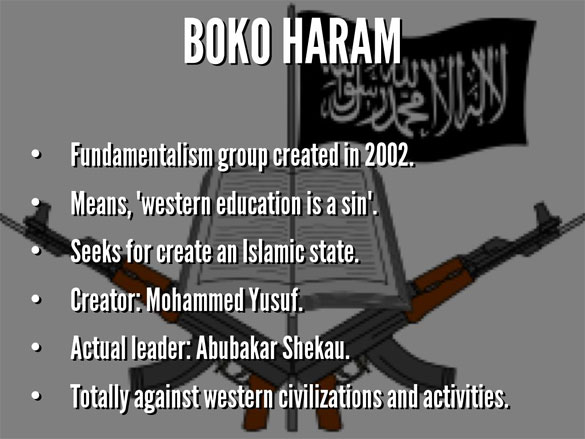 It is to note that Boko Haram has attacked a science school and it considers science and modern education un-Islamic though the Quran and Hadith advocate a scientific thinking among Muslims. Still there is no effort on the part of the Islamic world to remove the misconceptions of the grohp about science and modern education. The Islamic world has left Nigerian Muslims at the mercy of the terrorists who are not aware of true Islamic teachings and spirit.

The group has killed tens of thousands of Nigerian Muslims and caused the displacement of more than 2 million Muslims. In 2014 alone, it killed 6,600 people, mostly Muslims.

In the name of curbing the activities of Boko Haram the government of Nigeria had shutdown mobile services in three states. This had caused severe problems to the general people. Perhaps referring to tge mobile shutdown, the President Buhari had proudly claimed in 2019 that Boko Haram was technically defeated. He was so naive to believe that by only shutting down mobile services, terrorist organisations can be defeated. The recent attack by Boko Haram should suffice to wake him up to reality.

The reason behind the growing strength of Boko Haram is not difficult to ascertain. The organisation is now a part of a global terrorist organisation ISIS which is supported and funded by some Islamic countries like Turkey, Saudi Arabia and Qatar. The imposition of Shariah Laws in 12 Muslim dominated states of Nigeria in 2012 may also be one of the reasons as some political leaders may have sympathy for the group as it also advocates Shariah rule. Some political leaders of Nigeria are known to be influenced by the ideologues of Boko Haram.

Therefore, the roots of Boko Haram are deep in the corruption of the government and the military and in the political establishment that looks Boko Haram as the flag-bearers of Shariah. Unless these problems are addressed, Boko Haram will continue to kill and displace thousands of Muslims.

Posted by Moderate Islamist here at 5:38 AM