Zaira Wasim Showcases What Is Wrong with Muslims

Zaira Wasim tweeted a Quranic verse which talks of God’s wrath on ‘sinful’ people. The verse in question is 7:133 which reads,

‘So We sent upon them the flood and locusts and lice and frogs and blood: Signs openly self-explained: But they were steeped in arrogance, A people given to sin’.

This verse talks about how God punished the people of Egypt for disobeying his commands. The story and the context within which it is set is common to Islam, Christianity and Judaism. But to quote this verse in a context when locusts are actually devastating crops in many parts of India is to say that God is sending them to punish Indians who are not just arrogant but also knee-deep in sin. 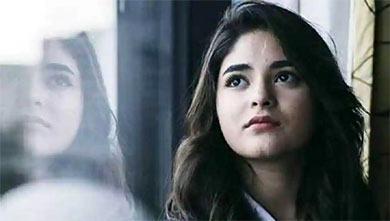 Zaira would have us believe that the farmer whose crops were laid waste by swarms of locusts is only himself to be blamed because despite clear signs and warnings from God, he did not mend his ways. It is pertinent to recall that that the young actor recently quit Bollywood after discovering that Islam does not allow her to work in such a profession. Ever since, she has been tweeting verses from the Quran and narrations from Hadees with the zeal of a new convert.

Since most Indians are Hindus, this particular tweet of Zaira is insulting because it is basically telling them that they are in sin as they do not worship the one true God and do not walk on the path shown by Islam. In an atmosphere where religious tolerance is the need of the hour, this tweet of hers will only add fuel to the fire.

Nearly eight decades ago, Gandhi blamed the practice of untouchability for the devastating earthquake of 1934, which brought death and destruction in Nepal and Bihar. Gandhi suggested that the earthquake was ‘a divine chastisement for the great sin we have committed against those whom we describe as Harijans’. It was certainly wrong of Gandhi to invent religious reasons for a natural phenomenon and was rightly chastised by Tagore. Yet, he had a higher purpose for doing so: eradicating a social evil which had plagued Hinduism for centuries.

Zaira’s tweet serves no such higher purpose. Rather, it makes fun of millions of Hindus just for having a different religious orientation.

This problem is not limited to Zaira Wasim. Many Muslims share her position. While some rightly called her out, most ended up supporting her, arguing that the attacks on her are only the latest example of Islamophobia in India. Some even went to the extent of saying that it is her freedom of expression to do so. Certainly, freedom of expression should be absolute and should also mean the freedom to offend, but most Muslims do not understand that those critiquing her are also exercising their freedom of expression.

Even when Muslims realise that a certain Quranic verse is problematic, they end up justifying it because they think that critiquing the Quran is blasphemous. The Muslim belief that each and every word of the Quran is true and eternal is partly the reason why we see even sane Muslims justifying the stance of Zaira and many others like her. As the ‘uncreated’ word of God, the Quran becomes coeval with the Almighty Himself and therefore finding faults within the Quran becomes tantamount to finding faults with God. It was this blind deference to this religious text which a group of Muslim philosophers called the Mutazilas were trying to challenge but which eventually did not succeed. They argued that the Quran was ‘created’, which could have paved the way for revisions or the development of critical hermeneutics of the text.

The Christians were able to make this possible because they believe that the Bible is inspired by God but is not the literal word of God. In taking the position that the Quran is word of God, Muslims have tied themselves up, as this position does not allow any criticism of this text.

Immanuel Kant argued that Enlightenment, which changed the face of Europe, was not possible without the praxis of criticism. Critique is fundamental to the progress of knowledge, it opens up newer perspectives of looking at the self and the world, which unfortunately is in short supply in much of the Muslim world. Our intellectual stagnancy can be linked to our reluctance of not being critical towards some of the core assumptions in Islam.

Till the time we do not ask some tough questions related to our religious tradition, Muslims like Zaira Wasim will continue to write in a language which is insensitive and ignorant, to say the least. The really unfortunate part though, is that they will continue to do so in all earnestness, without realising that they are doing immense harm to the society in which they are living.

Arshad Alam is a NewAgeIslam.com columnist