Had Muslims Gone For Universal, Modern Education There Would Have Been Peace in Islamic Societies and the World, Not Terrorism and Militancy, Either Religious or Social

Islam Is a Religion of Peace Promoting Inclusiveness, Therefore, Terrorism Cannot Be A Part Of It

4.    Education for all is the mantra for all those who are concerned to bring spiritual and social developments to the world.

The Muslim world is in a fix on terrorism. Islam is a religion of peace-promoting inclusiveness, therefore, terrorism cannot be a part of it. Scholars of Islamic studies, scholars of Islamic social ethics and common Muslims, all are in doldrums, not understanding what is happening with Islam. All over the world, be it a Muslim country, a pro- Muslim country or an anti-Muslim country, everyone related to Islam or Muslims is trying to understand the problems engulfing the Muslim world and looking for its solution. It is because the world knows the implications of the problems faced by the Muslims will also impact them.

Muslims of the Asian countries, Pakistan, Bangladesh, India, Sri Lanka, Afghanistan and Maldives are illiterate and poor. They are more concerned about their everyday bread and butter than terrorism. For them the safety of their family as long as they are alive is more important than being surrounded by the horrors of terror, everyday western countries bombing on one pretext or the other. These non-existing Muslims, for the entire civilized and keepers of the human rights western countries, do not matter except on their database. And now the Muslims of these Asian countries, as well as Muslims of the entire world, have accepted the reality that now they have to extinguish the fire of terrorism that has been ignited by the Islam hating communities. Al-Qaeda Boko Haram Afghan Taliban ISIS and Pakistan Taliban or for that matter any other supremacist ideology-driven fascist cannot fight without the sophisticated weapons that they have. Countries that provide them arms and ammunition to spread terror could have financed Muslims to practice education Jihad. But they did not do so. Reasons best known to them. 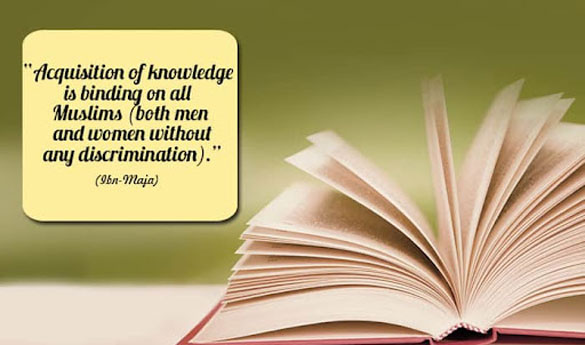 Education is being provided and campaigned by the developed world for the people who are loved not for the people who are hated. Hence, Muslims do not find themselves mentioned anywhere in the implementation of educational facilities.  Muslims for the reasons best known to the concerned, are not encouraged to study in the government-run schools and colleges, in various parts of the world, resultantly having no option they opt for madrasas that are run by the 'guardians of one or the other ideologies'. Richest of all the ideological masters have been the Wahhabism followers, so Wahhabi ideology run madrasas with better hostel and mess facilities are the first option for the poor Muslims of India, Pakistan, Bangladesh and Sri Lanka and others. Thus begins Muslim kids training in the ideology that teaches exclusivism and supremacism.

On the other hand, the powers that be made all efforts to keep Muslims illiterate and got successful in their plan by abusing Muslims for being complacent towards modern education. The plan to let them die for bread, not education was successfully implemented by those who fight for ideology, not humanity.  Now as is said, one reaps what one sows, the knowingly kept illiterate Muslims grew into terrorists and militants in place of scholars and scientists. Do not count those terrorists who are known to be masters of science and technology in this list as they are a pawn in the hands of self-greed and hypocrisy. They are the sophisticated and elegant boss terrorists running the show from air-conditioned villas, not the fighter terrorists, the killing and being killed battlefield terrorists.

Had the mechanically run killing machines been literate, they would not have accepted the ideology of killing fellow beings. Had they at least been taught the Holy Quran and the Prophetic traditions they would have been angel-like people in the service of humanity as doctors and scientists, professors and scholars, aware of what Allah the Most Compassionate says in the Holy Quran: "Whosoever killed a person ... it shall be as if he had killed all mankind" (Al-Maidah:32)

We, all who are willing to see the end of terrorism from mother earth, need to educate those who are treading the path of destruction, the terrorism. Those who are fighting against western education should know, Prophet Muhammad (ﷺ) says: "Seek knowledge and wisdom, or whatever the vessel from which it flows, you will never be the loser." - Prophet Muhammad (SAW). The said tradition commands the believers to acquire knowledge without discrimination between the Holy Quran, Prophetic traditions, madrasas and English medium schools and universities.

The Muslims should be told that this universe is created by Allah the Most Compassionate so every subject, science, technology, medicine and philosophy along with courses in Islamic studies are His creation, therefore, they must study all and benefit from its knowledge. Muslims should also know about the following traditions of Allah’s Apostle Prophet Muhammad (ﷺ) that says acquiring knowledge is the best form of worship and spreading knowledge is mandatory on every Muslim. Consider the following traditions:

"The best form of worship is the pursuit of knowledge." - Prophet Muhammad (ﷺ)

"Scholars should endeavour to spread knowledge and provide education to people who have been deprived of it. For, where knowledge is hidden it disappears."

Muslims need to ask the following question asked by someone from the Messenger of Allah Prophet Muhammad (ﷺ) and the answer given by him should be inscribed on the psyche of every Muslim. Prophet (ﷺ) says that it is mandatory for all of us to constantly keep learning from others (irrespective of religion, caste or creed) in whatever subject the knowledge may be available. Consider the following Hadees:

Someone asked the Prophet Muhammad (ﷺ): "Who is the biggest scholar?" Prophet (ﷺ) replied: "He who is constantly trying to learn from others, for a scholar is ever hungry for more knowledge." 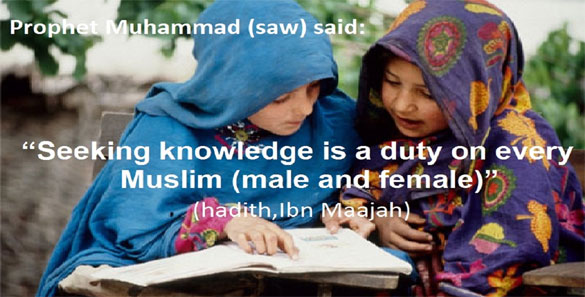 Prophetic Tradition on the Importance of Knowledge

The acquisition of knowledge is compulsory for every Muslim, whether male or female." - Prophet Muhammad (ﷺ)

"Seek knowledge from the cradle to the grave." - Prophet Muhammad (ﷺ)

The Messenger of Allah (ﷺ) said: "Whoever takes a path upon which to obtain knowledge, Allah makes the path to Paradise easy for him." (Tirmidhi)

"Contemplating deeply for one hour (with sincerity) is better than 70 years of (mechanical) worship." - Prophet Muhammad (ﷺ)

"To listen to the words of the learned and to instil unto others the lessons of science is better than religious exercises." - Prophet Muhammad (ﷺ)

Quranic Verses on Education Being Mandatory

Allah, The All-Wise, All-Knowing constantly describes the benefit of knowledge and the rewards for acquiring knowledge and the obligation of spreading knowledge in His revelations on the Prophet of Islam Hazrat Muhammad Mustafa (ﷺ) in the Holy Quran. Muslim scholars and Quran exegeses are duty-bound to spread education among the Muslims to get them rid of illiteracy that has driven them to poverty and illiteracy.

…they could devote themselves to studies in religion, and admonish the people when they return to them, – that thus they (may learn) to guard themselves (against evil)” (Quran, 9:122)

“It is only those who have knowledge among His servants that fear Allah." (Qur’an 35:28)

"And they shall say had we but listened or used reason, we would not be among the inmates of the burning fire." (Quran, 67:10)

Above mentioned Quranic Ayaat should be a lesson for all those who matter in making the world in general and Muslims in particular, study and be a positive source of inclusiveness and ethics of pluralism. Education for all is the mantra for all those who are concerned to bring spiritual and social developments to the world. And let us all raise our hands in unison and ask our Creator to increase our knowledge, "O my Lord! Increase me in knowledge" (20:114) and reward us for spreading knowledge as far as possible.

To fight the terrorism and militancy of every form either religious, ideological or social, the world will have to begin an education Jihad and get rid of all kinds of terror jihads.

And Allah Knows the Best.

Arman Neyazi is a columnist with NewAgeIslam.com.

Posted by Moderate Islamist here at 7:22 AM